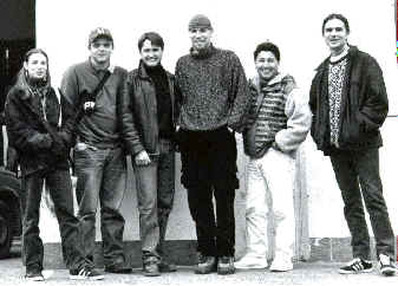 ﻿﻿MIND THE GAB was founded by Pixner Kurt and Gabi Freitag in January 1995 with Stefano Sgorbati. The initially formation was a trio with Kurt on guitar and vocals, Gabi on lead vocals and Stefano on percussions. After a period for 1 and a half year of playing live and writing songs together we decided to reinforce the group with two additional musicans. Charlie Schatzer on bass and Eric Frajria on drums and occasionaly a sax, with Michi Agreiter.﻿﻿
GABI played: ( Ibanez accoustic guitar and Shure 58 mic. )
She began writing songs at the age of 15 and played live with an accoustic guitar. 1984 she won a song contest and went to Berlin in the HANSA STUDIOS to make a recording session. In 1987 she travelled to London where she lived and played for 6 years and met some interesting groups like the FAIRGROUND ATTRACTIONS; STONE ROSES and RAGGA TWINS. In 1989 she met Kurt in London who payed a visit to some friends and came with his guitar to play in the underground and took a look at the music scene. In 1993 she came back to South Tirol and started  to work with local musicans and to play her songs live with an accoustic guitar. 1995 she was asked by Kurt to play together in a trio and to form the new group MIND THE GAB:

Kurt played: ( Gibson Les Paulstandard, Fender Stratocaster, Höfner Nightingale Special and an custom made accoustic guitar. Gallien Krüger and Peavey Bandit Amps, Zoom 2020, AKG 1000 mic. Yamaha QY 20 )
Played and studied music with friends since 1987 but he is known from the ALUNA JAZZ BAND, which he found with the other members. It was the apprenticeship where he took his strong jazz, funk and latin influences and in arranging songs. In 1994 he tried to form a crossover projekt named THE PEX; with other local musicans, made some weird demotapes but didn ´t found the right folks to work with. In 1995 he asked Gabi and Stefano to join him in an accoustic trio.

Stefano played: ( all latin percussions and native instruments from all over the world )
He played in many local groups for many years but the most important was the great GIANLUCA MOSOLE GROUP an italian guitarist with a wide reputation and some great CD ´s on the market. He tourt for about 2years through Italy and met Nanà Vasconcelos and Airto Moreira. Played at the Rolling Stone in Milan and at the famous UMBRIA JAZZ: FESTIVAL:

Charlie played: Warwick 5 string and a SWR redhead bass amp )
He ´s a good friend over the years and was persuaded by me to join the band, although he plays the guitar. I guess he ´s much better on the bass..... gell Charlie!!!!

Eric played: DW drums and joined the group at the studio sessions.

He playes in several bands and you can hear him on a few PERPETUUM MOBILE productions..
CD FACTS
" Natural high " is the title of our  CD.
I think it represents all the styles me and Gabi were influenced by and you can hear a strong jazzy, funky heritage from my time at the famous " ALUNA Jazz Band ".

We didn ´t had the money to put the lyrics on the label, but now you have the great opportunity to take a look a the storys Gabi wrote and get a closer information about the recording sessions. Enjoy the trip !!!!!!!!

The Cd was recorded in springtime of 1998 at Perpetuum Mobile Merano and produced by MIND THE GAB.

4 songs were recorded 6 month earlier for a demotape that we sended around the world and to have a demonstration tape to organize live concerts. At that time we played our live concerts as an accoustic trio with a sequencer. ( Gabi vocals, Kurt acc. guitar and vocals, Stefano percussions ) For the demotape we engaged Mario Punzi as drummer for the following songs: "all about songs, natural high and what a shame" .

As we finished the recordings of the CD, these 4 songs
were remixed and some new instruments added.You can hear the strong accoustical influence in these songs, which later was changed in a more rock and funky style. In fact when you hear these songs on our live concerts you ´ll be aware that the style has remarkably changed.
Silvio Frajria did a great contribution to this album, and was the ear of the recordings. We began the recordings without basslines, because at that time we didn´t have a bass player nor a drummer. So we had to add this new instruments when we finished the basic tracks. Like on all recordings we left some solos and ideas off the CD, because we had to take preferences. So some sax and guitar solo didn ´t found their way on it. But I think it was better so, because we didn ´t had the time
and the money to develope new ideas and put it on the record. The final mix was held in October 96 and with all the organization issues ( label, grafic style, photos, CD
presentation ecc. ) we had to manage, there was not much time for rehearsal. We wanted to put the Cd on the market before Christmas to make a large sale on our CD, and pay our debits that we´re  free of financial pressure.

All the persons involved in the CD except the band members:
Silvio and Mike Frajria, Christian Martinelli ( fotos ), Marco Scalia ( comics ), Paolo Ferigo ( grafic design ), Thomas Hölzl ( lending us his selfmade drums ) Bruno Demetz ( sax ), Mario Punzi ( drums ), Johnny Sanzio ( for screaming at the end of Natural high ), Eugen U-Gene Raffl ( 4 his financial help ), Brauerei Greiter (for supporting our live performances ), Astrid Ladurner ( for love, inspiration and tips )
and all the folks who helped us on the distribution of the CD and that support our live concerts.
Thank you very much!!!!!!!!!!!!!!!!!!   KURT